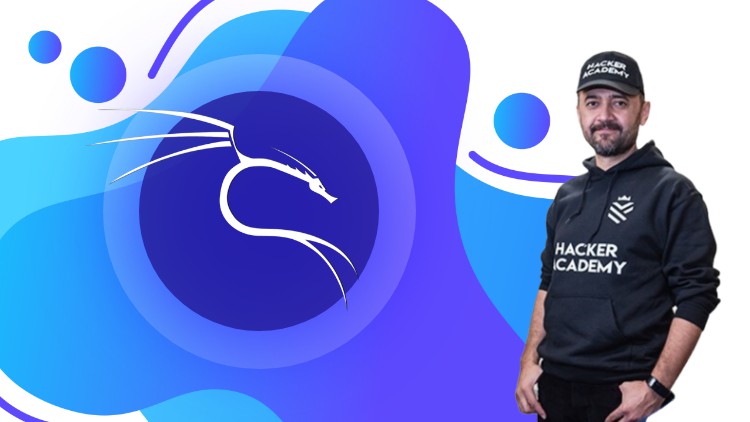 Welcome to the "Kali Linux: Start Your Ethical Hacking Career with Kali" course.

Kali Linux Tutorial! Learn Kali Linux from the pros how to use Kali Linux easily and quickly.

Kali Linux Tutorial! Learn from the pros how to use Kali Linux easily and quickly.

Ethical hacking is a popular expertise thanks to the stylization of white hat hackers as heroes in pop television and movies. In real life, ethical hacking is just as valiant, and Kali Linux is a powerful tool for getting the job done. Udemy features top-rated Kali Linux classes to help you don your white hat.

Kali Linux is a pre-packaged Linux distribution built around the Linux kernel. Kali Linux is designed specifically for ethical hacking and penetration testing tasks, and features a host of free and open-source security tools and applications like Metasploit and Nmap.

Linux is available in a range of different distributions that are tailored to the needs and skills of its users. Simple distributions, like openSUSE, are great for personal computing, while Linux Ubuntu is ideal for network admins and computer scientists.
Linux has a somewhat inaccurate reputation as being a much more technical and complex alternative to mainstay operating systems like Windows and MacOS. In reality, Linux is an approachable, open-source, and customizable OS that’s designed to address huge deficiencies in commercial operating systems.
Our student says that: I loved this course and it taught me so many things, that now I am very competent in a terminal that has a UNIX background. Almost all of what is taught was transferable to the Mac terminal, and thanks to this course, I can even make my own scripting programs to make my life easier.

What is Kali Linux?

Kali Linux is an open-source, Debian-based Linux distribution released in March of 2013, primarily created for advanced Penetration Testing and Security Auditing. It used to be known as BackTrack Linux. Kali Linux contains hundreds of tools that perform various information security tasks, such as computer forensics, reverse engineering, security research, and penetration testing. It provides a multi-platform solution that is freely available and accessible to both professionals and hobbyists in the information technology industry.

What is Linux and why should I use it?

Linux is an operating system (OS), which is the primary software that a computer uses to execute tasks and communicate directions to its hardware. The operating system that competes the most with Linux is Windows. Linux is a popular and widely-used OS because it is open-source, meaning that it is free to the public, and anyone can modify and customize Linux software as they wish. The reasons to use Linux can vary from developing an app or building a video game to learning how to hack computer systems. As Linux is one of the most popular operating systems, many developers use it to develop their web applications and software programs. This means knowledge of Linux is important for anyone working with computers and software in general. Learning how to work with Linux is a necessary skill for anyone pursuing a career in ethical hacking or penetration testing

Why do hackers use Linux?

Both ethical (white hat) hackers and malicious (black hat) hackers often prefer to use the Linux operating system (OS) over Windows OS. The biggest reason hackers turn to Linux is because it is far more accessible to a wider range of people than Windows OS offers. Linux is free, open-source, and provides a well-integrated command-line interface for users to customize the OS. This means anyone can modify Linux to create their own programs and software. Malicious hackers often opt for Linux because it gives them more control when using Linux, and ethical hackers need to be well-versed in Linux because it’s so popular among black hat hackers. Ethical hackers also often prefer using Linux as it has better existing security measures than Windows and doesn’t usually require third-party antivirus software.

How long will it take to learn Linux and how can I teach it to myself?

The time it takes to learn Linux can vary, depending on whether you have existing background knowledge of other operating systems and how deep of an understanding you want to gain. For beginners learning Linux to pursue a career in IT or software administration, you may only need a basic understanding of how to navigate and execute functions using Linux and how applications built on Linux behave. If you plan to become an ethical hacker, or pentester, you may need a more in-depth knowledge of Linux security procedures and a skill in manipulating Linux programs. You can learn Linux on your own time by seeking out video tutorials and online courses. There are plenty of courses available on Udemy that teach the fundamentals of Linux and more advanced Linux skills.

What careers use Linux?

Many jobs in IT, software development, and cybersecurity rely on Linux skills and expertise. A career in app development generally requires a deep understanding of Linux, as many app developers use Linux as a basis for their applications. Software-focused career paths that frequently use Linux include developer and software engineering roles for Python, Java, and Linux systems. Nearly any role in cybersecurity, such as a penetration tester or ethical hacker, requires a strong knowledge of Linux. With Linux expertise and skills, you could work as a system administrator, IT professional, system architect, or database administrator. You may even work in website development, maintenance, or security, as people in those roles build a majority of their web applications on Linux.

What is the core of the Linux operating system?

The core component of any operating system is called the kernel. Linux’s core is simply referred to as the Linux kernel. The Linux kernel is a single program that manages crucial tasks such as allocating memory, communicating software functions to the computer’s CPU, and comprehending all of the input and output from the computer’s hardware. The kernel is the most important part of an OS and often runs in a separate area from the rest of a computer’s software. The kernel is just one part of a full operating system, which includes a combination of components such as the bootloader, init system, graphical server, desktop environment, and more. The name “Linux” can refer to both the kernel itself (the Linux kernel) and an operating system built around that kernel. For example, the Android OS and the Ubuntu distribution are both made using the Linux kernel.

What are the best Linux distributions for beginners?

Advanced computer knowledge is no longer required to use a Linux operating system.

Anyone at the beginner level can take this course. And this course will take you even further. This course is a practical course. You'll learn some theory first and then have the chance to apply what you've learned.

In the "Kali Linux For Beginners" course, you will learn;

At the end of this course;

The instructor does a great job of explaining Linux commands using small and concise examples.

Our answer is simple: The quality of the teacher. When you enroll, you will feel the expertise of OAK Academy's experienced instructors.

Basic computer knowledge will be sufficient!

This course starts with the basics. First, you will learn some terminology. Then the show will begin and you will learn everything through hands-on exercises. I will also teach you the best practices and shortcuts.

You will also get:

We offer full support by answering any questions.

See you in the course!

Linux As You Go